Originally the area was frequented by the Boonwurrung/Bunurong people and then visited by Matthew Flinders in 1802.
The first European settlers entered the area in the 1840s seeking timber and fish and taking up pastoral leases.

The Government survey by Permein in 1854 allowed for land sales of the area called Schnapper Point/Snapper Point. A jetty was built in 1857 giving the growing township a good deep water port. This was followed by the Courthouse in 1861 and the Post Office in 1863.

The township, declared Mornington in 1861, was named after the 2nd Earl of Mornington who had been British Foreign Secretary. Mornington quickly became the major commercial and legal centre for townships and rural communities across the Peninsula. Mornington was also to become a popular bayside destination for holiday makers and day trippers. 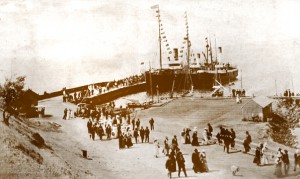 Steamers from Melbourne called at the jetty from the 1860s and the train began running daily from 1889. The Royal, Kirkpatrick’s and the Grand Hotel  are fine examples of the hotels plus the Guest Houses built to accommodate the holidaymakers. The road to Frankston was soon to bring the first motorists and buses, replacing the Cobb and Co coaches and eventually the steamers and the trains.

The establishment of Real Estate and Farm Service Agents meant land sales and subdivisions in the area slowly but gradually increased the population. The wealthy of Melbourne were building beautiful homes in the area, Beleura was built in 1863,  followed by others, including Craigie Lea, Marina, The Anchorage, Koorootang, Woodcliffe and Sunnyside on Pt. Nepean Road.

The opening of the railway gave the township easy access to Melbourne via Frankston and helped with its development. The Council established the successful Tanti Saleyards for stock which could then be transported by rail to Melbourne. A Gas Works was established  alongside the railway line. Later the railway was an important service for Balcombe Army camp for transporting troops and equipment.

A number of private and government schools flourished.
Mornington Fire Brigade was established in 1917 with the church bells acting as fire alarms.
Several private hospitals serviced the community until the Mornington Bush Nursing Hospital opened in 1937.
The first burials were held in the late 1850s at the Mornington Cemetery, previously known as Moorooduc cemetery, you may like to visit our Pioneer Cemetery website.
From small beginnings Mornington is now a busy town and its exciting cosmopolitan street scene has something for everyone.